For the last few forevers, I've been working on a Poe-inspired Cabinet of Curiosities.

(a little background information -- Edgar Allen Poe was the author of the poem, The Raven (Nevermore!) and some spooky stories you may have heard of -- The Tell-Tale Heart and The Masque of the Red Death to mention just two.
I was a bit of a fan-girl back when I was a teenager.

I saw a golf-trophy box in one of our local op-shops a few months back and immediately thought I could make something with it (because seriously? golf balls? who displays GOLF BALLS?) I handed over my $5 (I know!) and hurried home to sand and generally distress the frame. 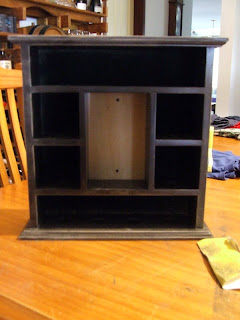 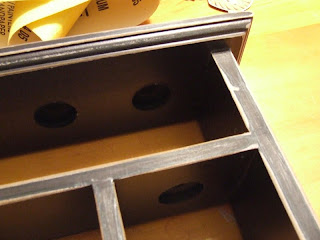 You can see the holes that the golf balls sit in.
Rather than fill those in, because I'm basically too lazy, I tipped the box upside down, so the holes were in the 'ceilings' of each compartment.
The centre held a piece of removable glass for a photo to go in (so you can have a photo of yourself with your special balls, I guess) but I didn't want the glass so I covered it with paper.
I also papered the backs of each compartment, and the 'floors' of all but the centre one.
Then I began shopping and filling each area.

So here we go, on a Tour of Mums' Spooky Cupboard (as it is known in our house) 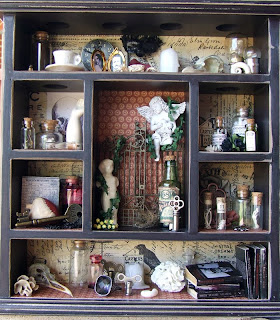 Here is the whole Cabinet.
You can see the holes in the top shelf, I know, but that's because I shot the photo from slightly below.
The Cabinet sits at eye-level normally.

The papers I've used are Graphic45 'Race For Time' and 'Genuine Article', from the Old Curiosity Shoppe range.

Some close-ups of the top shelf show: 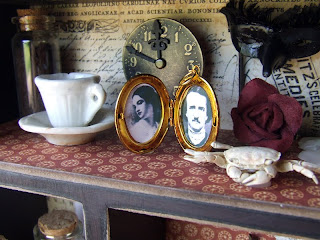 - a bottle of graveyard dirt (coffee grounds) and a bell (which I unaccountably didn't manage to photograph!) I put these in because of the Victorian fear of being buried alive, which spawned a number of horror stories.

- a Victorian teacup and saucer, given to me many years ago by a friend.

- a mask which I made from Sculpey and black eyelash fringing, from The Masque of the Red Death and also a little bit of Assassins Creed (dottore masks) crept in here.

- a locket with photos of Poe and his wife, Virginia.

I bought the locket on eBay for a couple of dollars, and toned it down with Ranger alcohol inks (Ginger, Latte and Meadow)

- a paper rose from Kaisercraft

- a tiny crab shell sent to me by my awesome son 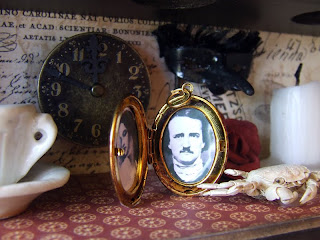 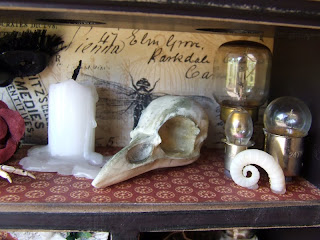 - a candle, carefully cut and melted
- a raven skull, from Raven Ranch Studio (thanks Ada!)
- three light bulbs (two? from Tim Holtz, one from my bedside lamp!)
- a spiral shell from my beach 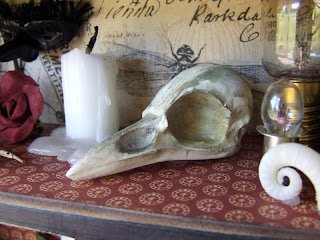 How cool is that skull? 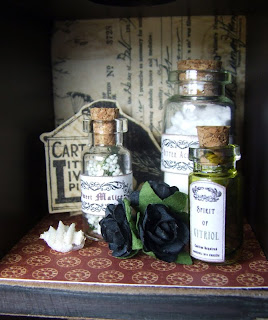 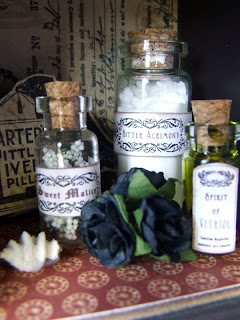 I adore these bottles -- they were among the first things I made and I enlisted some help on the internets to come up with the titles (thanks Rick!)
We have -- Sweet Malice (with snipped Kaisercraft posies)
Spirit of Vitriol (coloured with lettuce alcohol ink, swirled inside the vial and heated)
Bitter Acrimony (bicarb of soda)

All the bottles are a mixture of Tim Holtz corked vials, and bottles I bought at my local thrift store. - the labels came from Cathe Holden.

- the black roses are Kaisercraft, and the little shell came from my beach. 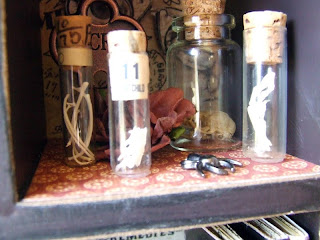 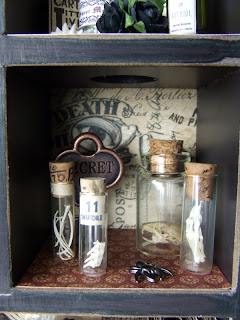 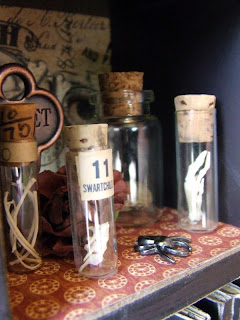 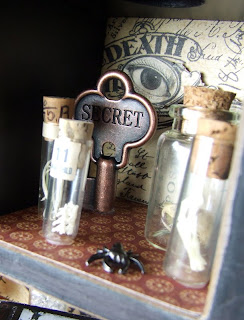 You would not believe how excited I was to get mouse bones in the mail.
- the paw, ribs and vertebrae came from PulpMiscellania and I thought they might not make it through customs, so I was delighted when the parcel arrived!
- the mouse skull came from my awesome son, who spent hours cleaning it thoroughly for his strange old mum!
- the SECRET key is from Tim Holtz.
- and what would a spooky cupboard be without a spider? this charm came from my2angels

Some of these photos I took before I added the rose (Kaiser, again) but I've used them because they were more clear than the ones I took later. 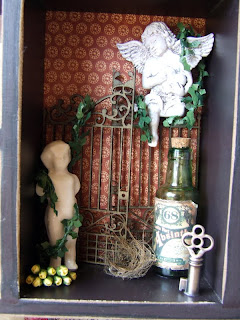 The centre window was one of the most fiddly to do.
Because, as usual, I started without a clear plan OR all the bits. 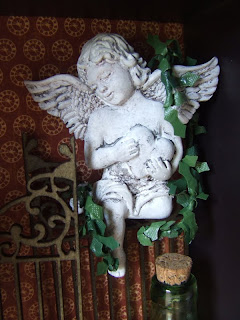 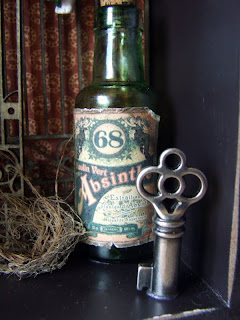 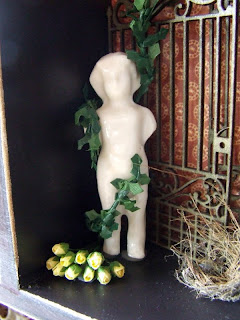 - the angel is a Prima Shabby Chic Treasure, and I grunged him up with Iced Spruce and Black Soot Distress Inks (from Tim Holtz) so that he looked like he might belong in a cemetery.

- then I decided he needed something to 'sit' on, so I cut and glued a chippie birdbath from Dusty Attic to fit, then inked it with Vintage Photo and Black Soot Distress Inks. Then I took it away and forgot to put it back for the photo. Not sure if it will make a re-appearance.

- then I thought cemetery gates would be cool, and I planned to fit them at the front of the window.
I hunted for 2 days, and the best I could find that fitted the image in my head were these Kaisercraft gates.
I bought them from Olga at Sassy Scrapper, and she faffed around endlessly for me.
THANKYOU, Olga!

- when the gates arrived, I inked them with Vintage Photo and Black Soot, and then realised they cut off too much of the view at the front, so I placed them behind the cherub, and by sheer good fortune, they fitted neatly.
Which was lucky because that cherub would not come off his paper without a fight.

- I then added 'ivy', which came from some cheap mini-wreaths I got in a card-making frenzy a few Christmases ago.

- the absinthe label was printed from the net and distressed a bit, the bottle is from Tim Holtz.
I put some Meadow and Lettuce alcohol inks in the bottle and swirled and heated till I burnt my fingers, but I got the look I was after and that's all that counts, right?

- the fractured doll is from Tim Holtz, and I puzzled for ages whether to ink it or not.
In the end I decided to stay with the alabaster look, but I think it would have looked equally cool crazed and inked.

- the 'nest' is some fuzz that dropped off some firewood, and I rolled it into a scruffy nest shape.

- I have no idea where those roses came from. 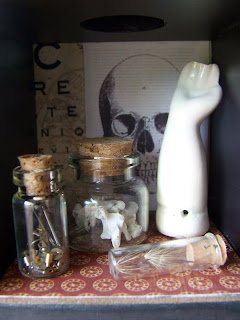 - I spent literally days looking for a vintage wooden hand.
When I saw this one (which is porcelain) I wasn't sure if it would be exactly right but I love it.
It came from Mary Poppins Vintage.

- I boiled chicken necks to get those bones in the bottle at the back.
The dogs were very happy with my experiment.

- the bottle on the left contains watch parts.

- the bottle lying down has some dandelion seeds in it, collected from the roadside near my house. 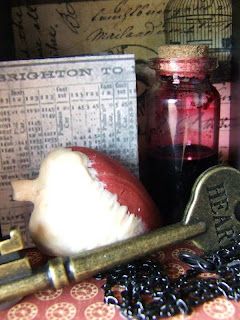 Have you ever tried to make a human heart from Sculpey?
NOT an exercise for the give-up-easily-types (like me).
In the end I bought some lamb hearts from the supermarket, and modelled a heart on those.
The dogs were also happy with this experiment.

This window is inspired by the Poe story, The Tell-Tale Heart.

- I put a railway schedule at the back, which was printed off the net, because the display needed some height.

- the bottle of 'blood' is Cranberry alcohol ink from Tim Holtz (note to self, buy more Cranberry ink!)

- the HEART key is also Tims' and the chain came from the raven skull. 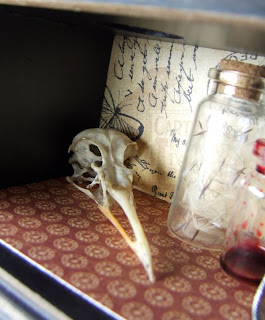 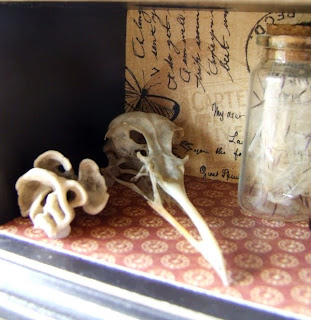 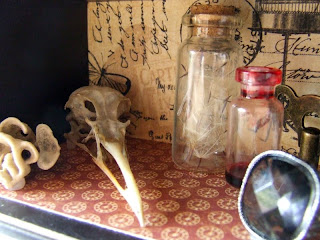 - this amazing seagull skull came from, again, my awesome son, who cleaned the thing patiently (it also has it's bottom jaw which clicks into place, but it didn't look right in the display).

- beside it is a bit of seasponge? from the beach.

- the large vial contains dandelion seed, the smaller, more 'blood'.
I was running out of time and ideas by now. 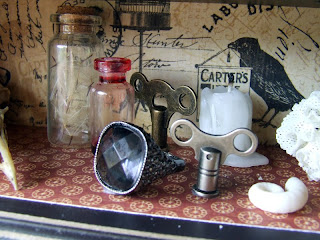 - the ring is from Avon, and reminds me a little of memento mori jewellery.

- the clockwork keys are from Tim Holtz, and I filled in space with leftover candle and shell. 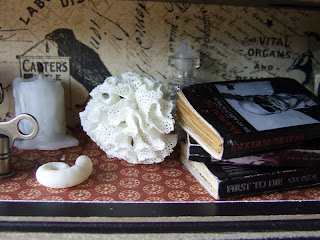 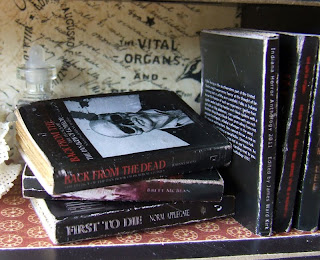 And finally, these amazing little books were made for me by my friend, Kym.
How utterly PERFECT are they???
I squeaked when I first saw them, could not believe how well they fitted the whole theme (and Kym made them without knowing what I was doing!)

I haven't finished with this project.
I don't really know if it will ever be finished.
I plan to add some tiny black feathers, a bee or a blowfly (dead, of course!) and some honeycomb.
I also found a tiny paper wasp nest (empty!) which will be added into a bottle.

And then I need to work out how to display the entire box to keep dust and little fingers out.

In the meantime, it's truly nice to just look at it all.

Well, if you've stuck with this post for this long, you deserve a medal.

Or at least a cup of tea and an Iced Vovo.

Thanks for reading through this massively long description -- and if you could leave a comment, I would be thrilled. :)
Posted by Toni at 6:00 PM

Hi there, and thanks for taking the time to leave a comment -- I LOVE hearing what you think (:

what are you looking for?

this one's a winner